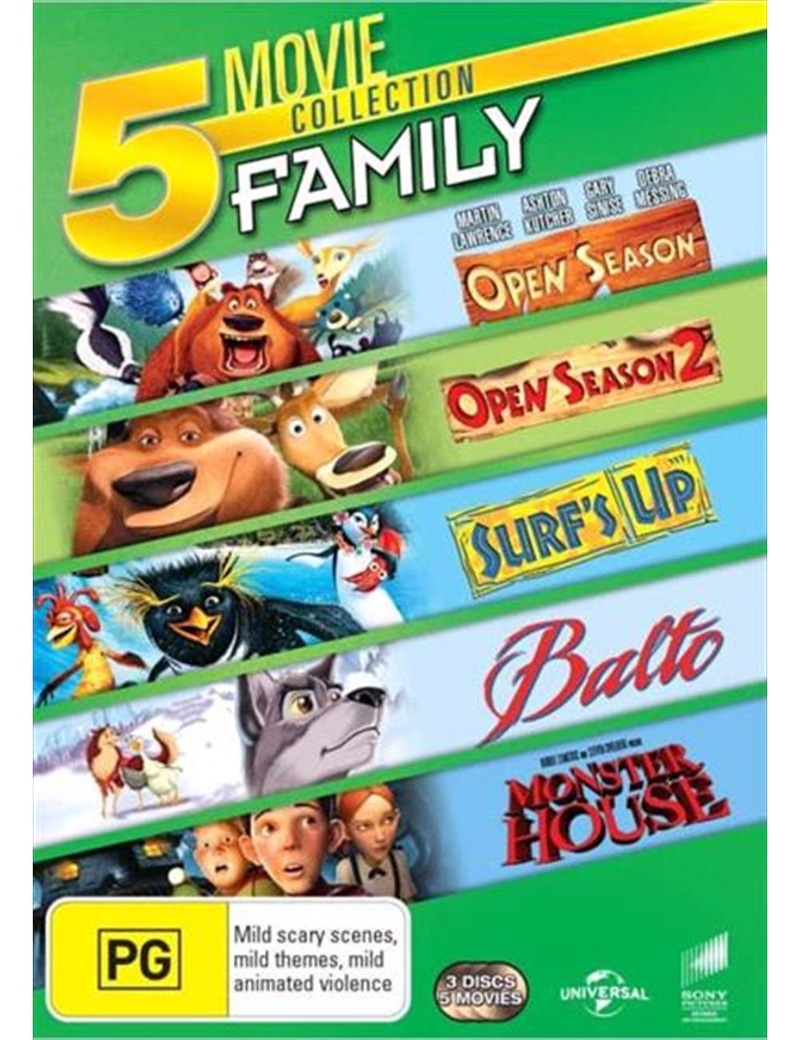 4 interest free payments of $3.74
No refunds for Change of Mind for this item provided by third-party sellers

Collection of five animated features. In Open Season (2006), when a domesticated grizzly bear called Boog (voice of Martin Lawrence) gets lured into leaving the creature comforts of home by a fast-talking mule deer named Elliott (Ashton Kutcher), he finds himself lost in the woods just three days before hunting season begins. Forced to rough it in the great outdoors, Boog goes native, rallying all the forest animals to take back their home and send the hunters packing. In the sequel, Open Season 2 (2008), after falling head over hooves in love with fellow deer Giselle (Jane Krakowski), Elliot (Joel McHale)s road to the altar takes a slight detour when Mr Weenie (Cody Cameron) is kidnapped by a group of pampered pets led by petulant poodle Fifi (Crispin Glover). In Surfs Up (2007) young penguin Cody Maverick (Shia LeBeouf) dreams of winning the biggest penguin surfing competition of the year: the Penguin World Surfing Championship. His pursuit of this goal becomes the chosen subject of a team of documentary makers who go behind the scenes of the competition and interview Cody, his friends and surfing fans along the way. In Balto (1995), Balto (Kevin Bacon) is a half husky, half wolf who does not seem to fit into either family. He becomes a hero when a diptheria epidemic and blizzard combine to threaten the lives of the children of Nome and he has to lead a team of sled-dogs over 600 miles to obtain the life-saving medicine. In Monster House (2006) DJ Harvard (Mitchel Musso) lives directly across the street from a most unusual house. A malevolent entity that longs to feed on the energy of the living, the once peaceful house that looms ominously outside of DJs bedroom window would like nothing more than the chance to feast on the children of the neighbourhood. As Halloween begins to draw near and the children of the neighbourhood prepare for another long night of trick-or-treating, it appears as if it may be the house that is in for the biggest treat of all.

This item ships from our sister brand Sanity 's warehouse and may arrive in a separate parcel.
Sizing can be different to our normal styles depending on the style of garment and preferred fit ie loose or tighter fitting. Refer to the size guide above for your ideal fit.
Sister brand products cannot be returned to stand alone stores. Remember we offer free returns within Australia. See our Returns Policy for full details.